The International Space Station will host seven crew members throughout the holiday season, the most ever for the orbiting laboratory in its 20 years of having humans living aboard. The international crew includes NASA astronauts Kate Rubins, Michael Hopkins, Victor Glover, and Shannon Walker; Japan Aerospace Exploration Agency astronaut Soichi Noguchi; and Russian cosmonauts Sergey Kud-Sverchkov and Sergey Ryzhikov.

The international crew will take the day off from working on the space station and sit down for a special meal together, as well as calling home to talk with friends, family, and loved ones.
It’s a full house on the International Space Station with 7 people — and Baby Yoda
“I’m very happy to be on the space station this year because I get to share American traditions with my international crewmates,” Walker said. She hinted that they may stream some football games, another Thanksgiving tradition. It’s her second Thanksgiving in space; she was also on the space station in November 2010.
The menu includes cornbread dressing, smoked turkey, green beans, and mashed potatoes. Noguchi brought some special Japanese “party food” to share, including curry rice, red bean rice, and some special seafood that a Japanese high school student on Earth prepared for the crew.
The crew also shared their Thanksgiving wishes from space on Wednesday.
SpaceX-NASA mission: Four astronauts arrive at International Space Station
“The year 2020 is a tough one, but it’s also the year of Perseverance and the year of Resilience and I really hope every one of you cherishes every moment with your friends and family,” Noguchi said. The names of the Perseverance rover and the SpaceX Crew-1 capsule Resilience, both launched this year, seem even more meaningful to the crew during the pandemic.
For Hopkins, its his second Thanksgiving in space after spending the holiday on the station in 2013.
“For me, Thanksgiving is all about family,” Hopkins said. “This year, I’m spending it with my international family. We all feel very blessed to be up here and we’re very grateful for everything we have.”

Holidays away from Earth

Astronauts have marked the tradition of celebrating holidays in space since the days of the Apollo mission when the Apollo 8 crew famously shared their Christmas Eve message in a live television broadcast in 1968 by taking turns reading from the Book of Genesis in the Bible.
It’s been 50 years since Apollo 8 united a fractured world
The first Thanksgiving in space was celebrated on November 22, 1973, when Skylab 4 astronauts Gerald P. Carr, Edward G. Gibson, and William R. Pogue each ate two meals at dinnertime, although nothing special was on the menu for the occasion. The three worked on and supported a spacewalk lasting six hours and 33 minutes earlier in the day and missed lunch.
How these holidays are marked and celebrated is up to each individual crew and space veterans tend to share suggestions and ideas with rookies before they go up, NASA astronaut Dr. Andrew Morgan told CNN.
Morgan spent the entirety of the holiday season on the space station in 2019 alongside crewmates Jessica Meir, Christina Koch, Alexander Skvortsov, Oleg Skripochka and Luca Parmitano. 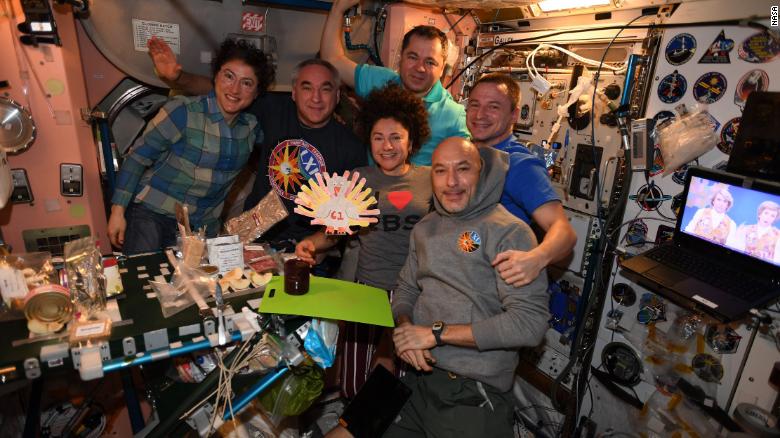 It’s not Thanksgiving in space without some handmade turkey decor.

Although it was a busy time on the space station with multiple spacewalks and experiments on the schedule, the astronauts were able to come together for a special meal that weekend with their international crew members and talk about what Thanksgiving meant to them.
Turkey, stuffing, and mashed potatoes are on the standard menu for NASA astronauts in space, but they also saved special treats like smoked salmon and cranberry sauce to share with each other. In space, the cranberry sauce perfectly retains the shape of the can it came in. Meir and Koch also made hand turkeys for their table decor.

Out of this world Christmas memories

In the days leading up to the holiday, Morgan and his crew played Christmas music throughout the station and had classic holiday movies playing to create a festive atmosphere. They also used a projector with a recording of a burning yule log to make it look like they had a cozy fireplace on the station, he said.
Given the international nature of their crew, they actually celebrated Christmas twice: Christmas on December 25 and Russian Orthodox Christmas on January 7. 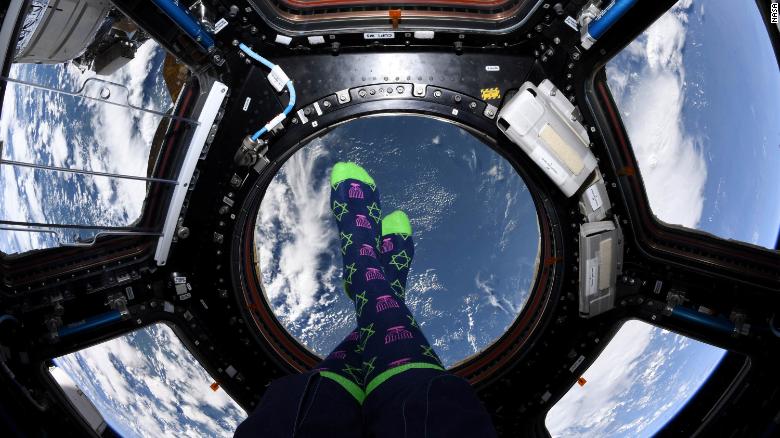 Meir showed off her Hannukah socks in the cupola.

Meir is Jewish and marked the passing of Hanukkah on the space station, tweeting pictures of her festive socks, but she also grew up celebrating Christmas as well and joined in the festivities on the station.
Astronaut Jessica Meir celebrates Hanukkah from, where else, space
If your idea of planning ahead is buying Christmas gifts on Black Friday, it’s very different for astronauts thinking ahead to their space mission if it includes holidays. 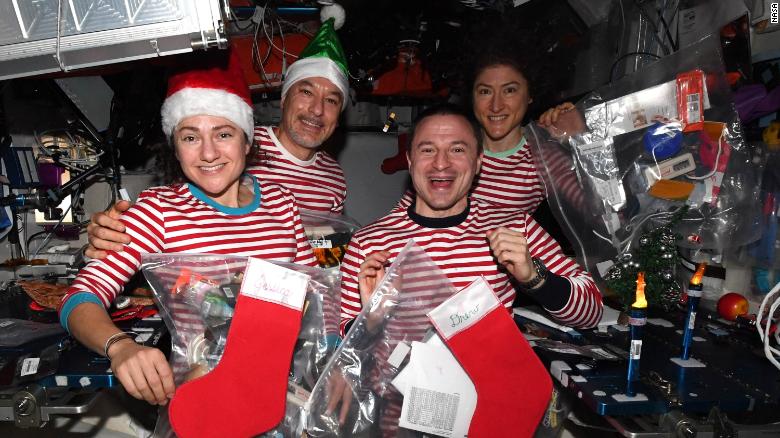 “We had to think about a year or more in advance to make sure we purchased, packed, and kept these gifts a secret the entire time,” Morgan said.
Morgan knew that Parmitano enjoyed a special Russian treat called chocolate cheese, which is essentially a heavy chocolate fudge, so Morgan saved some to include with Parmitano’s present. Morgan also gave every crewmate a harmonica in their stocking so they could have a harmonica band on board.
Together, the crew shared a holiday message and serenaded their mission control centers across the world with one refrain each from John Lennon’s “Happy Christmas” and José Feliciano’s “Feliz Navidad” — all while wearing matching festively striped pajamas.
Morgan was missing his family and thinking about the traditions he would normally share with them. One of his favorites is spending Christmas eve only lit by candlelight. He grew up with this tradition and continues it with his family. 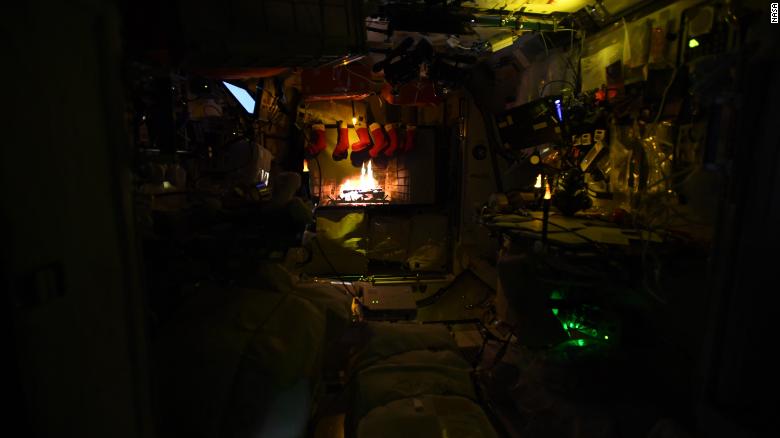 A festive yule log is projected on the space station.

When he woke up on Christmas morning in the space station, all of the lights were turned off in the modules, a normal occurrence while the astronauts are asleep.
But Koch had taken small flashlights and covered them with gold-colored tape to make them look like little burning candles. They were everywhere — in the lab, the crew quarters, the galley where the crew eats.
“When I saw that, I actually got choked up with nostalgia,” Morgan said. “It made me think about missing my family during Christmas, but also just the thoughtfulness of Christina’s gesture. She had paid attention to that little detail and it was extremely meaningful. It’s one of the many memories I cherish from my time on the space station.”

The space station operates on Greenwich Mean Time to stick to a schedule. The crew witnesses 16 sunrises and 16 sunsets each day as they orbit the Earth at 17,500 miles per hour.
So when it comes time to say “Happy New Year,” the crew has many chances to celebrate. They make calls down to each mission control as the new year arrives in their time zone.
New Year’s is a much bigger holiday than Christmas for the Russian crew, so the entire crew came together to enjoy a large meal and toast to the year ahead. 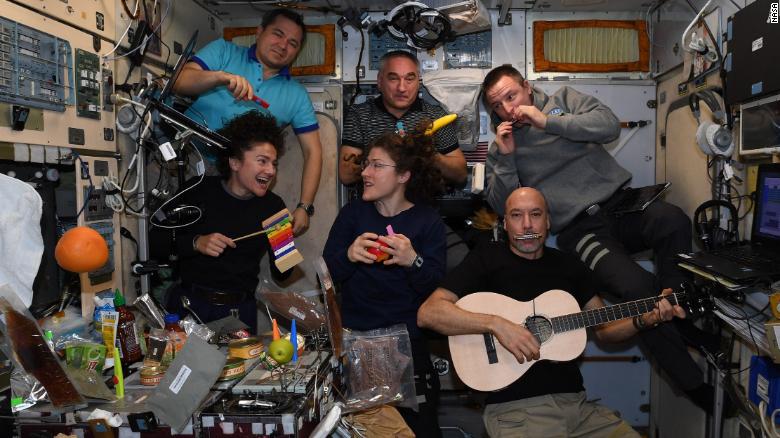 The crew formed a band to serenade mission control centers around the world.

But the other big tradition involves watching a Russian film, which, when translated essentially means, “The Irony of Fate.” The 1976 Soviet romantic comedy television film has “a little bit of a bizarre plot about a gentleman who becomes so drunk, he ends up in Leningrad and doesn’t know how he got there,” Morgan said.
Russian spacewalk helps prepare the space station for the new module
It’s a cultural phenomenon to watch the movie on New Year’s Eve in Russia, so it is played in the Russian segment to honor the tradition.
“To experience that with our Russian crewmates was extra special,” Morgan said. “That exchange of those traditions and experiencing each others’ holidays and sharing that with each other across an international crew, that will be the thing I take away from that experience. It embodies everything good about international cooperation and sharing traditions across different countries.”

While the astronauts normally have the ability to send emails, do video conferences, and make phone calls, they get a little more time to do these so they can connect with family during the holidays.
In 2020, it’s also how families and friends are connecting as their social distance to stay safe.
“While it isn’t perfect, we still have a lot to be thankful for,” Morgan said. “We have the technology available to be part of each others’ holiday experiences even though we are far apart, whether that be across states, oceans, or from low-Earth orbit.”
It’s his first Thanksgiving home since 2018. While they usually host astronauts and cosmonauts in Houston who are visiting for training, they can’t do that this year.
Humans have been living on the space station for 20 years
Morgan said the key to enjoying this holiday season is similar to how the astronauts celebrate in space: with planning, intention, and thoughtfulness.
Connect with people you haven’t reached out to in a while, be deliberately thoughtful and make small gestures that have a big impact, Morgan said.
Being an astronaut during a pandemic: ‘I think I will feel more isolated on Earth’
Before going to space, he collected photos of his friends and family. In space, he took them to the cupola, where Earth is visible from the space station, and took photos of his loved ones with Earth as a backdrop. It was a simple thing, although it took some planning, but brought joy to his loved ones.
Morgan also shared his wish for the current crew on the space station as well as everyone on Earth.
“As they experience the holidays separated from loved ones, so are the majority of the people on this planet right now,” Morgan said. “But that separation is finite. The crew will return and be reunited, this pandemic will pass and we will all be reunited as human beings.”
Source: CNN
0
0 Share